Whiting Forest of Dow Gardens features 54 acres of woodlands, ponds, apple orchard, meadows, and stream. Guests of all ages and abilities are immersed in the forest on the nation's longest canopy walk, 1,400 feet long, soaring up to 40 feet above the ground. Other features include a playground, apple orchard, Cafe, and two pedestrian bridges.
2,720 tons


Amount of ADA Accessible hard-surface pathways within the forest

Steel used to fabricate the St. Andrews Bridge,
connecting the property to the Rose Garden

Used on the Visitor Center bridge, connecting the Forest to the Grace A. Dow Memorial Library

Longest in the Nation

Designed to be accessible for all ages and abilities and open in every season. Canopy Walk has three arms, each end at a unique viewing platform, including views of a forest pond from 25 feet up, a large cargo net in a grove of spruce trees at 25 feet high, and an orchard view which includes a viewing platform with a glass floor and railings at 40 feet high.

Whiting Forest of Dow Gardens welcomes the public to explore the longest canopy walk in the nation and 54 acres of woodlands, ponds, apple orchard, meadows, stream, and playground.

Whiting Forest is a signature gift of the Herbert H. and Grace A. Dow Foundation.

NOT ON LIVE PAGE - THESE ARE THE POP UP GALLERIES. Longest in the nation, Canopy Walk is 1,400 linear feet (just over 1/4-mile) and is ADA accessible. Canopy Walk features a large cargo net on the Spruce Arm, a relaxing overlook on the Pond Arm, and a glass overlook on the Orchard Arm, 40 feet above the ground. Visitors can also gather at the Knot and exlpore two Pods, unique shelters among the trees. 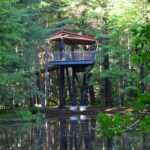 A peaceful place for forest views, the Pond Arm provides serene views 25 feet above Lake Margardor and the surrounding forest. Quiet guests will enjoy sights and sounds of wildlife and the rustle of leaves in the treetops. 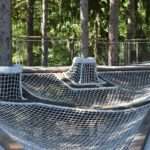 The Spruce Arm Overlook is nestled in a grove of large spruce trees, where an expansive cargo net suspends guests 25 feet above the forest floor. There are three layers of nets for safety, each thick white braided cord can individually support 35,000 pounds. In summer, water misters offer a refreshing respite from the heat of the day. An exciting area of Canopy Walk, offering a 'perceived sense of danger'. The Orchard Arm Overlook is the highest point of Canopy Walk and features a glass overlook 40 feet above the Orchard. A large deck in the open air offers panoramic views of the orchard, forest, playground, and Café. 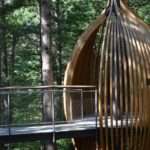 A place for visitors of all ages to play in the trees. The design of the Pods was inspired by 'umbel' of a Queen Ann's Lace flower. The two 'pods' along Pond Arm offer unique places to play among the treetops. The East Pod is connected to Canopy Walk by an accessible walkway. 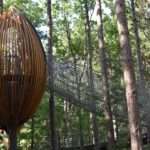 After traversing a cargo net bridge, the West Pod offers children of all ages two levels to explore. 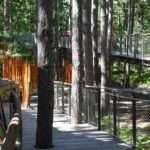 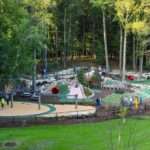 The ADA accessible Playground offers an interactive water feature, swings, slide, and equipment to climb over, into and through. 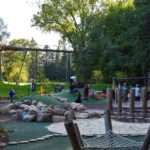 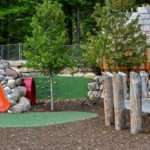 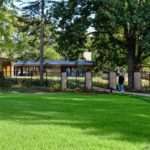 In 1947, Macauley and Helen Dow Whiting commissioned Helen's uncle, Alden B. Dow, to design this home for their family. A classic example of mid-century modern architecture, it was enlarged a number of times between 1949-1968. 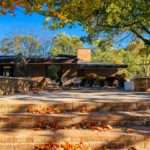 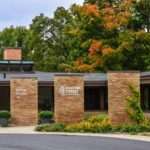 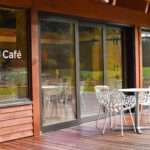 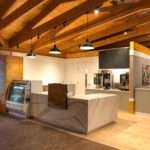 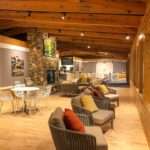 The Café is ADA accessible, with restrooms and parking available. The Forest is ADA accessible for all ages and abilities, including 1.5 miles of hard-surface pathways and 1 mile of wood chip/mulch surface. Invasive Emerald Ash Borer beetles decimated mature ash trees along Snake Creek. As a result, 1,200 dead trees were removed and replaced by nearly 3,000 trees and shrubs, of 34 native species. These young plantings will mature into a healthy floodplain ecosystem. Snake Creek meanders from its source upstream to the Tittabawassee River, flowing for 1/2 mile through Dow Gardens. Extensive restoration efforts have reduced erosion and improved habitat for wildlife. As healthy new plantings mature, the landscape of Snake Creek will continue to improve, creating a thriving environment for generations to come. 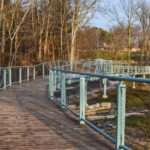 The Rose Garden Bridge connects visitors with the Forest. 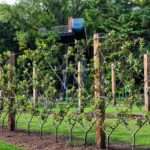 The orchard was planted around a Mother Apple tree from the Herbert H. Dow era and contains more than 104 different varieties of fruit trees. Orchard zones established are: First Apples Ever (apples traced back to first variety, originally discovered in Kazakhstan), Early Domestic Apples (contains 'heirloom' varieties grown by the Founding Fathers), Homestead Apples (varieties of apples once grown by Herbert H. Dow), and Modern Apples (apples found in most grocery stores). 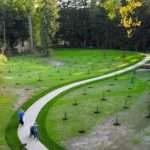 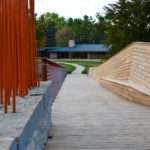 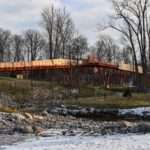